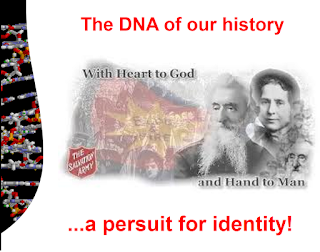 NORSK
In the Salvation Army, we have lately focused on defining our DNA. I have lectured on the subject in many seminars over the last six-seven years. To reach out with our mission, we need to know who we are. It is about identity-building.

The most important part of a Salvationist’s DNA, is the identity of being a disciple of Jesus. The Salvation Army part is mainly about the identification with our mission. I find it very interesting that Paul defines the third role he holds as a steward of the gospel, as the role of the “Teacher” (1).

THE MENTOR WAS A TEACHER OF THE GOSPEL
The Teacher-approach is about identity-building. Luke reveals how important this is when he summarises what united the first Christians and built their identity:


They devoted themselves to the apostles’ teaching and to fellowship, to the breaking of bread and to prayer.
Acts 2:42

Yesterday I wrote that the role of the apostle gave authority to the role of the teacher. That is because one, whose aim is to build identity, must know whom he represents and know him. Further he must know that he is sent out. When the idea of representation (commissioning) and sending has become part of the “spine”, the true identity is in place, and the teaching he presents becomes trustworthy because it is seen as a part of the mentor’s life. Therefore, he also becomes an identity-builder.


To build identity in others, I need to have it myself!