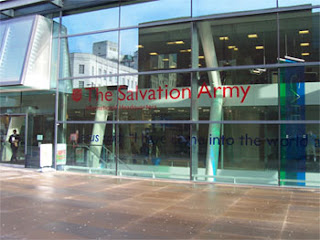 NORSK
I did not like the new building that houses The Salvation Army’s International Headquarters until I five years ago heard the philosophy behind. General John Gowans had a clear purpose when the new IHQ was constructed in glass. Gowans wanted the building to be a signal that the Army desires to be completely transparent.

This is also the desire behind the “Journey of Renewal” campaign that is currently ongoing, and which also is the base of the study I am doing on how Paul made Timothy accountable for the mission entrusted to him.


The sins of some are obvious, reaching the place of judgment ahead of them; the sins of others trail behind them. In the same way, good deeds are obvious, and even those that are not obvious cannot remain hidden forever.
1 Timothy 5: 24-25

“It cannot remain hidden forever”, my grandmother used to say. As a child I was unsure if it was a comfort or a threat – today I think it was both.

A few days ago Obama pardoned Chelsea Manning who in 2010 was arrested for having leaked extreme amounts of confidential information to WikiLeaks. Manning was sentenced to jail for another 28 years. I do not know if the pardon was given exclusively on humanitarian grounds, or whether Obama has become aware of the fact that in our time “nothing can remain hidden forever”.

I believe Paul wrote this to Timothy at least two reasons:
Paul wrote about on this subject in several letters, like here: “everything exposed by the light becomes visible” (1).

I believe that my quality of life is best when I dare to live in the light - in other words live openly and transparent. The one who does not have secrets, has no fear of exposure. This is the liberating gospel believers are entrusted to preach.


Dare to live transparent in the light of the world