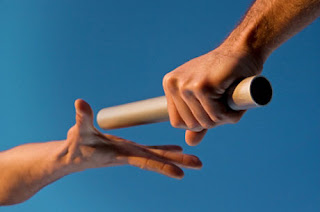 NORSK
‘Pass it on!’ has been a motto in several campaigns I have taken part in, but it also suitable as an explanation of purpose and content of mentoring. Paul was very conscious that this was his role in relation to Timothy:


This charge I commit to you, son Timothy, according to the prophecies previously made concerning you.
1 Tim 1:18a

'Mentor' is not a new word. It first occurred in the Odyssey, where Odysseus asks the elderly and wise Mentor to be in charge of the education of his son, Telemachus. Gradually 'mentor' became a concept for someone who imparts wisdom and shares knowledge with a less experienced colleague. In other words, someone who passes on what he himself has learned and experienced.

It fits well with the Great Commission where Jesus ‘commits this charge’ to his disciples: "Go therefore and make disciples of all nations" (1).

The principle is simple: A disciple passes on to a new believer what he/she has received and learned. In this way the process continues into eternity. In the relationship between Paul and Timothy, there is much to suggest that Paul saw Timothy as his successor. Paul’s way of addressing him as ‘son’ as in today’s verse, or as "my true son in the faith" (2) supports this thought.

It is also interesting that Paul writes that this is "according to the prophecies made concerning" Timothy. Paul had on many occasion experienced how prophecies had confirmed his own ministry from the days of his repentance, through Ananias (3), and throughout the rest of his life. He knew how important such confirmations are for a follower of. It is possibly the reason why he came with the exhortation: "Be eager to prophesy" (4). What is important, is important to pass on!