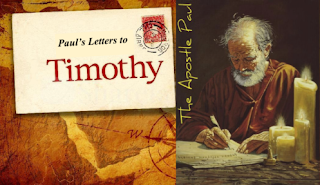 NORSK
I feel that I know Paul well, and although I have read the letters he wrote to Timothy many times, I'm looking forward to getting to know Timothy better in the weeks to come. Paul called him:

If I translate the Greek directly, it reads ‘my legitimate child’, but most translations prefer to use "my true son in the faith." It is evident that Paul and Timothy knew each other well, and it is likely that Timothy viewed Paul as his spiritual father. Paul and Barnabas came to Lystra on the first missionary journey, and it is not unlikely that Timothy and members of his family came to faith in Jesus during the first visit.

When Paul again came to Lystra with Silas, Timothy was already a disciple, and Paul wanted him to join the team of missionaries. The fact that Paul, because of the Jews, chose to circumcise Timothy because of his Greek father, supports the thesis that the two knew one another and that Timothy had deep respect for the decisions Paul made (1). The strange thing with the circumcision of Timothy is that one of the tasks that Timothy should do, was to convey "the Statutes for the Gentiles" which had been approved at the Council of Jerusalem. These statutes announced that there was no need for 'Gentiles' to be circumcised. It shows how Paul put mission first and used pragmatism as his strategy (2).

Although Paul calls Timothy for his true son in the faith, this does not necessarily mean that he was the one who led Timothy to faith in Jesus. Paul's way of addressing him in this way, may have rested on his desire to affirm Timothy in the faith as his mentor - in the same way as a father affirms a son:


But you know that Timothy has proved himself, because as a son with his father he has served with me in the work of the gospel.
Phil 2:22

The letters Paul wrote to Timothy are full of affirmations, but also of exhortations and reminders about the good habits. That is why they form a good basis for a study of discipleship as journey of renewal. A journey that lasts a lifetime. Affirmation and accountability are the keys to make this happen. Regarding affirmation, I can hardly imagine anything better than being affirmed as "a true child in the faith."


The mentor must hold the disciple accountable through affirmation.