It is about following* 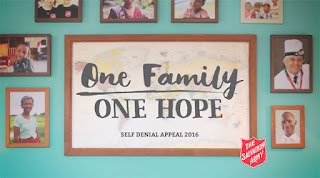 NORSK
Last Sunday was ‘Self-denial Sunday’ in Eastern Europe. During the five preceding weeks, a part of the Sunday service was dedicated to the focus on our responsibility in and for the world. It was a moving moment when the officer announced the result of the offering and the people rejoiced when they heard the amount collected. Of course, the offering could have been used in our country. We could even have used it for heating the hall in which the first meeting took place – the temperature was app 5-6 degrees, but in a very limited way, it puts self-denial into perspective.

I have grown up with the word “self-denial”. It was part of my vocabulary long before I thought about what the word really means. I believed that it was internal Salvation Army terminology, because I did not hear the word often used outside of our context, but it is indeed Biblical:

Again no one has exemplified self-denial in a better way than Jesus:


Greater love has no one than this: to lay down one’s life for one’s friends.
John 15:13

It is easy to see that Jesus was thinking about what he himself was going to do for his friends in just a few days’ time, and it is then easy to relate this verse to the teaching following his first announcement of his mission:


Then Jesus said to his disciples, “Whoever wants to be my disciple must deny themselves and take up their cross and follow me.”
Matt 16:24

This leaves me with three important points:
All three of them are costly, but they are part of a disciple’s life. I agree with those who claim that we for a long time made it hard for people to enter a church and easy to be a disciple. Today I think that it has become easier to be accepted into many church-communities. The challenge is if we are offering discipleship with a discount. Again it is time to reflect on yet another Bonhoeffer-quote (1)


Holiness is about following Christ*