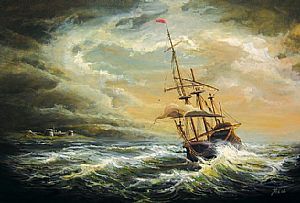 NORSK
The ship that was going to bring Paul from Crete to Rome was caught up in a terrible storm not long after they had left the shore. The hurricane winds were so strong and raging for so long that they ‘finally gave up all hope of being saved.’ (1). In this situation Paul executes authority. He has received it from the Holy Spirit, and it is strengthened by a revelation in form of a vision. His first task is to build up courage in the crew and the passengers:


So keep up your courage, men, for I have faith in God that it will happen just as he told me.
Acts 27:25

Paul’s words of ‘comfort’ become more credible because he does not try to hide the realities (v 26). Nothing is more devastating to courage than pessimism. The pessimists normally declare themselves as “realists” because they see all the barriers and challenges. Paul definitely saw the challenges, but was still an optimist because he saw a solution. ‘Salvation’ would not come without a price, but it was still a salvation. Solomon said:

Paul had a vision (or revelation) of a realistic solution and had sufficient faith to share it with the others.