A Prophetic Sandwich - a matter of urgency

A matter of urgency 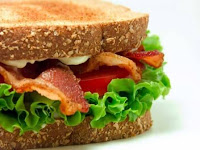 Over the past months many incidents have drawn my spiritual attention towards something which looks like a “prophetic sandwich”. For several years God has spoken to His church in general and some messages seem to be sent to the specific mission of the Salvation Army. Lately several of these visions seem to come together in a way that must be more that coincidental, and it gives me a strange feeling of excitement and urgency: Either we eat or we die!

The common factor is a link to prophetic messages in the book of Isaiah. I feel I could write a whole book about it, but due to the urgency I will try to keep if brief:

Lars is a dear brother in the Lord whom I had the privilege to share deep spiritual fellowship with in the weekly ecumenical “Prayer for Oslo”. In June 2003 Lars had just completed 40 days of fasting, and on this particular morning I was just about to leave for my office as usual at 9 AM after three wonderful hours together with the prayer-warriors. Lars was leading praise and worship, and as I opened the door to leave, he stopped and said: “Jostein, don’t leave! I have something to share!”. I stayed, and listened to what God had spoken to him in ‘the wilderness’: “I believe God’s special messages for us and our time is to be found Isaiah 54:1-4” – and then he shared what God had shown him. I knew it was a prophetic, and for me it was a moment of preparation.

Only a few days later I stood on a podium in a sports-hall as Commissioner Israel Gaither’s interpreter. It was the soldiers’ meeting in our territorial congress. In his message Gaither told that he had asked God for a special word for our church, and he had been given Isaiah 54:1-4. I felt that the Holy Spirit shaking me as I interpreted. The Chief continued to expose the passage and I knew that it was God speaking through him as he focused on:

The lower crust is to grasp the promise and possibilities found in these words!

I believe this is the rediscovery of the prophetic DNA of the Salvation Army. Of course this has been part of our movement since our early days with William Booth using Isaiah 58 to define our charter. The prophecy is a vivid expression of an integrated mission. When I in November 1999 attended a soldiers-meeting and listened to General Gowans’ articulation of our mission, I had a sense of listening to a prophetic confirmation of the charter. I have never claimed to see the full light, but I was only in my teens when I started to question the segregation of the ministry of our mission. All our ministries must be rooted in a local corps with ownership to the mission. If not, the vision of an integrated mission has a long way to go to become a reality. “Salvation for both worlds” must not only be rooted in the “one message of deliverance” as Booth formulated it in 1889, but must be administered by people who actually have a focus on “both worlds”. In Booth’s time this was not an issue, because this was the reality, but through years of segregation and “specialisation” we moved away from a fundamental principle.
The upper crust is the rediscovery of the Salvation Army’s DNA = the “coming together” of our mission as “one” – integrated in the way we organize us, but even more important: Integrated in the individual soldier.

It is possible to eat the crusts separately, but it helps the appetite if there is a nourishing filling – and in the prophetic sandwich the filling is essential. To my great joy I have seen a growing prayer-movement in our church. Our organisation will survive without prayer, but not our mission. When I some weeks ago listen to Janet Munn sharing the vision: “my house will be called a house of prayer for all nations.” (Isa 56:7), I again had a sense of being part of something prophetic, and the picture of the sandwich dawned on me. In the sequence of Isaiah’s prophecies the call to prayer finds itself in the middle. I just note this as a “Devine curiosity” – but it makes it even easier to remember when presented. And we need an encouragement to take this in. For my home-territory’s part, I now it is vital, yes, a question of life or death.

Because it is one of the most important metaphors in the Bible! Several of the prophets “ate” the word. John proclaimed that the Word became flesh and Jesus introduced himself as the bread from heaven – the bread of life. It caused a lot of misunderstanding and many left him in disgust. They could not grasp the spiritual meaning of what he taught:

What we eat becomes part of our body, it becomes us!

Migration, social media and the focus on the individual we have inherited from the postmodern era has left us all with a quest for identity. This challenge also faces me and my role in our movement. More than any time in our history I need to “eat” to find my identity in Christ and the identity of our mission.

This is emphasized further in the burden shared by the leadership both on international and territorial level.

I see how the “prophetic sandwich” comes to a climax in General Bond’s international vision-plan: One Army, One Mission, One Message.

I hear how it shouts to me in Commissioner Adams’ proclamation of a “Vivid Army” brought to life by the Spirit of God. It can only happen with an Army on its knees!