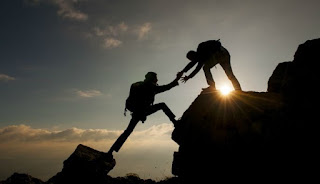 NORSK
Yesterday I read how Paul “passed the baton” to Timothy. Paul had on several occasions confirmed Timothy both in personal words and greetings, but also by reminding him of the prophecies made about him. This affirmation gave Timothy authority and confidence for the ministry he had already taken on, and the challenges ahead.


by them (the affirmations) you may wage the good warfare, having faith and a good conscience
1 Tim 1:18b-19a

Faith is a precondition for all work in the kingdom of God, and when leadership roles are in focus, it is extremely important that the conscience is a vital part of the decision-making. If not, it can quickly end up with abuse of power. Following up the quoted verse, Paul mentions that some have rejected the conscience.

These are really difficult verses, where Paul states that he has delivered them to Satan. However, it appears that this is not done in revenge, but rather that it will lead to repentance. This is also God's way of passing judgement. He leaves people to their own lack of judgment and their own misdeeds (1). There are many who then will come to “their senses” and return “home” (2). I have met some of them.

Today I am reminded of the importance to affirm disciples in general and particularly those who are going into special ministries in the Kingdom. They need it to wage the good warfare, having faith and good conscience.


By affirmations you may wage the good warfare