It is about a line 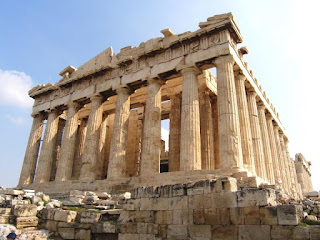 NORSK
If you have been to Athens, you have seen ruins of a great number of ancient temples. It was in this city Paul said:


The God who made the world and everything in it is the Lord of heaven and earth and does not live in temples built by human hands.
Acts 17:24

Yesterday I wrote that the Tabernacle eventually was substituted by the Temple. I believe this happened as a prophetic act which pointed ahead to the final act of salvation that was going to happen in Jerusalem through Jesus. When he died the curtain in holiest of holy was torn, it opened a way for all believers, as individuals and in unity to become a living temple. For, as Paul also said in Athens, and which I quote for myself almost every day:

Jesus knew that this was the reason for his life and mission, and revealed it to the Samaritan woman:

We can draw a line from the Tabernacle to the Temple and from there to every follower of Christ as a temple for the holy presence of God. It is made possible by the saving work of Jesus, and it saturates the world with his presence.


Where I am, is the Temple of the Lord!