It is about healing 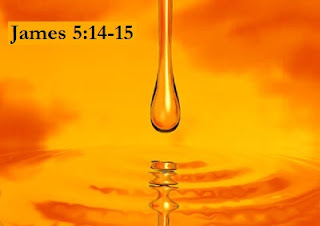 NORSK
When I mention the sacred anointing oil, many straight away think about ‘healing’. There is nothing wrong in such an association, because, as I will reflect on tomorrow, the sacred anointing oil filled a function even in the treatment and cleansing of the sick under the old covenant. In addition the practice of using oil was prolonged in the Christian tradition:


Is anyone among you sick? Let them call the elders of the church to pray over them and anoint them with oil in the name of the Lord. And the prayer offered in faith will make the sick person well; the Lord will raise them up. If they have sinned, they will be forgiven.
James 5:14-15

Our youngest daughter, Janne, had severe problems with asthma from a very young age. A couple of times the attacks were so heavy that we were afraid we would lose her, and we saw the wards in many hospitals. My mother at that time worked as the administrational leader of a municipal health department, and since she worked close to several doctors, she addressed one and asked:

“What can we do?”
The doctor, who was not a Christian, just looked at her and said:
“James 5:14-15!”
This shows that we can find just as much faith among those who do not confess faith, as among those who do. Since the oil is a symbol of the Holy Spirit, the oil also symolized relief and healing.

I have often used oil when I have prayed for the sick, but also on other occasions. It is important to be obedient when the Spirit urges me to do it. On several occasions, remarkable healings have taken place when anointing oil has been used. Yet, I am convinced that God has not made himself dependent upon any physical remedy, because he always looks to the heart (1). In a few isolated instances, I believe that the anointing has been important and even decisive for the person ministered to, because it has functioned as means of faith ignition – where the faith has not gone to the means, but to the pioneer and perfecter of our faith (2).


Holiness is also about relief