What is The Salvation Army about? 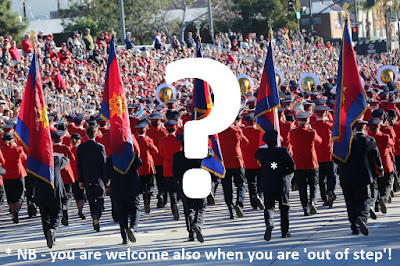 The answer will depend on how much the person answering knows about the organization. One would say: “It is my favourite store!” – with reference to our thrift stores. Another would say “They help the poor!”. A third may say “They have good brass-bands!” whilst a fourth states “It’s my church!”.
Nothing of this is wrong, however they are just fragments of the truth. I could continue with a multitude of statements that would say something about what we are.

For me The Salvation Army is all about mission; and mission is bringing the life of Jesus into the communities of our present time. We can do that through a thrift store, a poverty alleviation project, a brass-band, a church/corps or in a way that has not yet crossed our minds. That is why The Salvation Army has so many expression of the mission.

In the last twenty reflections, I have elaborated on General Brian Peddle’s “Call to Mission – NOW”. The danger with everything we do, is that we can continue to do it also after we have lost the focus on the mission. The store, the project, the band, the corps, or one of the many other expressions of our mission can replace the main focus, which is the sole reason for doing the mission.

Many years ago I was leading a large, quite traditional Salvation Army corps. In a meeting with most of the active members of the corps present, I said the following in my sermon:

“If it was possible for God to die, and he actually decided to die, it would take at least three years before this corps discovered it! Therefore, we would continue to what we have always done as though nothing of importance had happened”.

In some ways it was a “Wake-up call”, and the feedback afterwards was on the whole scale of emotional expressions. A young soldier came to me and said: “First I thought, you must be right, and I felt scared. However, then I thought, if God really died, I trust that Jostein will discover it, and I am sure he would tell us!” In some ways it was a joke, but I also sensed that he saw the seriousness of the message.

At all times we need to be reminded “Mission first!”. The General has reminded us. We need to remind each other: We need to spread the life of Jesus right where we are. The mission is not something we do, but something we live.

As I could say to the young soldier many years ago, I confirm again:

“God is not dead, he will never die, he conquered death and rose from the grave. He is alive in you!” (1)