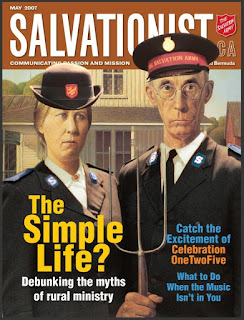 This article was published in the Officer (March 1994). I have left out the ingress that referred to the ongoing debate.

DO WE NEED THE FULL-TIME OFFICER?

When we first consider the question, I am sure we will say: "Yes", because when we start to count hours, I am sure that most of us will come up with a list which by far extend an ordinary worker’s week. Or may be we will say: "Yes" because the question is threatening. At the same time I am sure that most of us after scrutinizing the work completed which adds up our hours, will have to confess that a large percentage of it did not demand an officer. Local officers and soldiers could have used their gifts, and I am sure that many of them would have liked to, if they had understood that it was expected of them in the first place.

I know that you can work in this way, if you resign your officership and get a secular job, and then take on a corps as an envoy. But this is not satisfactory if you feel called to be an officer and cherish your ordination, even though "the man in the street" does not recognize nor care about the difference - for him you are the Salvation Army.

So what do I have in mind?

12 years back I was stationed in a rather small corps on . Close to 50% of the active soldiers were young students and had no income. Just after arrival, the headmaster of one of the schools in the town contacted me. He was looking for a person who could teach Norwegian. I was not a trained teacher at the time, but since Norwegian is my mother-tongue, I thought I could have a go at it - it was only three lessons per week. The news soon reached headquarters, and I was contacted, and asked to let go of "the job". After some arguments I was permitted to continue, because: "The Salvation Army was helping out the school in a difficult situation". Heart to God, hand to man! The school paid the wage straight to the corps, and we had our salary the ordinary way.

When I for a period left the work to take a degree, (when leaving I said to my leaders that I was going to become a tentmaker), the SA asked us to look after a corps. We were willing to try this part-time. The corps-people were so happy to have "officers" that they willingly shared the work. They had a good time, so did we, and the corps did not break its neck financially.

When I was standing by the Christmas-kettle last Christmas, a study mate of me came over to chat. He was surprised to see me in town, and since he was the leader of a municipal social security office, he straightaway offered me a job as an advisor for his social workers. I told him that I could not do this.

When I came home I realized that this kind of job would bring a lot of money, but would not take much time - with four hours per week, I would probably cover my officer-salary, but I have not done anything about it. The SA does not open for it, but isn’t it tentmaking?

May be I at this stage should mention a side-effect which can prove even more valuable than the financial help it will bring the corps. The "out-side" jobs have in a wonderful way extended my contacts. I have made contacts with people whom I was not likely to see in the hall, and since they knew that I was "The Salvation Army", the route to a spiritual conversation was short.

I know many objecting arguments when it comes to open up for officers to take "out-side" jobs, but why not leave these challenges to the officers themselves to solve. If the corps is not happy with such a solution, they can take on the challenge to raise the necessary money so that the officer does not need to take on the "extra" job. But time has come to put an end to the immoral use of money from the public.
Lagt inn av Jostein Nielsen kl. 14:44